The Skoda Yeti is the fifth new model produced by Skoda since the takeover by Volkswagen and is perhaps the most daring as it ventures into new territory looking to combine the rugged strength of an off-roader with the practicality and running costs of a hatchback. 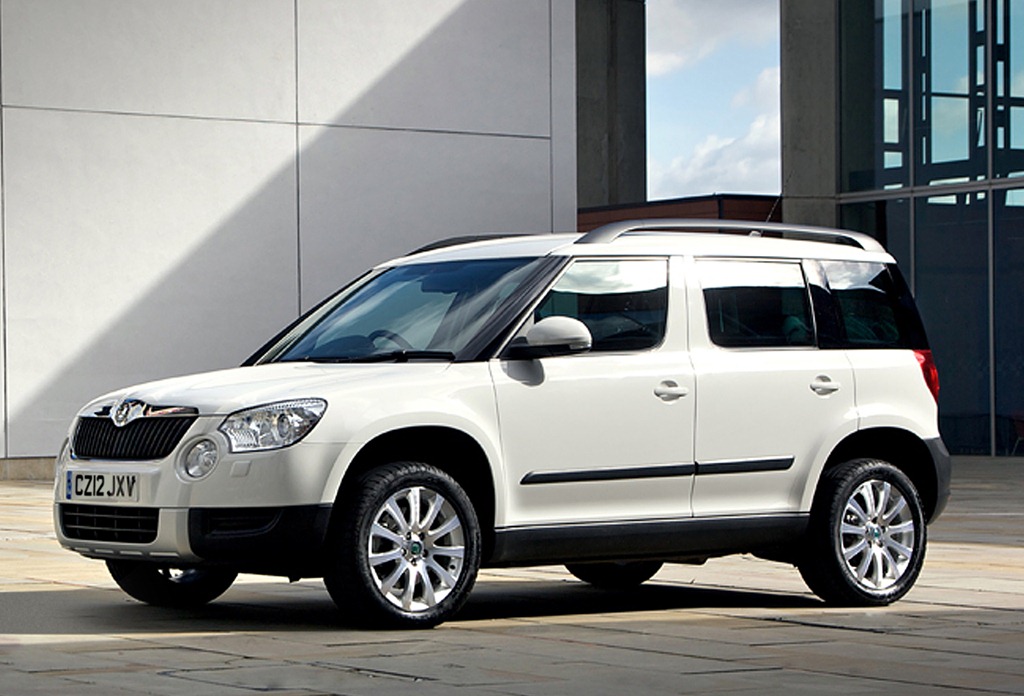 The Skoda Yeti’s interior displays clever design traits highlighted by the inventive Varioflex system that allows seats to be moved forward or backwards, reclined individually, rolled up completely or removed.
This allows rear seat passengers to find the most comfortable seating position while also maximising boot space. The Yeti’s tall, wide body means there’s bags of room for all in the cabin.

The tailgate is generously sized and, thanks to the car’s ride height, even tall drivers can stand underneath it when open. There’s also a drop down handle removing the need for a step ladder to close it for those more vertically challenged.
The Yeti has big windows on every side so there’s a great view in all directions. The driving position isn’t as high as it is in some crossovers but there is lots of adjustment for the seat and steering wheel to help the driver achieve a comfortable position.

All the switches and dials on the dashboard are logically laid out and easy to use.
The Skoda Yeti is a capable performer both on and off-road when fitted with the four-wheel drive fourth-generation Haldex system which under normal driving conditions allows 90 per cent of the power to go to the front wheels.

But if the Yeti’s control unit detects a difference in speed at the front and rear axles, the system can divert up to 90 per cent of torque to the rear. Coupled to a limited slip differential, drive can also be distributed from wheels on either side to give the Yeti better grip.

Two-wheel drive Yetis benefit from being attractively priced compared to the 4×4 models and they provide a decent drive on the road.
The Skoda Yeti achieves high levels of quality from the exterior finish down to the smart-looking interior. The cabin exhibits no rattles or creaks even when the Yeti encounters rougher terrain.

Approaching the Yeti for the first time the initial thing you notice is its striking profile. The front is pure Skoda with the chrome-faced grille and V-shaped bonnet line leaving no doubt as to whose family it belongs.

There are also large high-mounted headlights giving the front end a distinctive and friendly face. The strong lines continue along the side where the wheel arches and body protection strips give it a flowing profile.

At the rear the Yeti has an eye-catching wraparound design that creates a continuous window surface. This allows a tremendous amount of light into the cabin.
From behind the wheel, the only hint of the Yeti’s SUV attributes is the slightly elevated driving position. In all other respects, it feels like a small family hatchback to drive. On B-roads the Yeti feels composed, its supple ride and controlled body making it feel fun to drive. It cruises effortlessly on the motorway.

As far as the environment goes the Yeti’s carbon dioxide emissions are excellent. Considering it is an SUV it matches up well when compared to the best selling family hatchbacks.

The Yeti lets in a bit of wind and road noise at motorway speeds. The diesel engines can be a little intrusive when worked hard – but the levels are far from intolerable.

The Skoda Yeti is fitted with an alarm and an immobiliser as well as remote central locking to deter thieves.

The Yeti guards its occupants with active anti-whiplash head restraints and twin front, side and curtain airbags. All 4×4 models and the Elegance two-wheel drive version come with a driver’s knee bag and stability control.

There are a fair amount of goodies included on the Skoda Yeti! Even the entry-level model gets air conditioning, electric front windows and a CD player.

The Yeti mixes the lofty perch of a Sport Utility Vehicle with the environmental footprint and practicality of a hatchback.

The Yeti comes with either front-wheel or four-wheel-drive. Although Skoda expects the majority of UK buyers to opt for two-wheel drive variants. Alternatively you could consider the Peugeot 3008.