The Seat Leon isn’t the only car to get a new flagship model to look up to. Renault have revealed a new range topper with their popular city car the Renault Twingo. 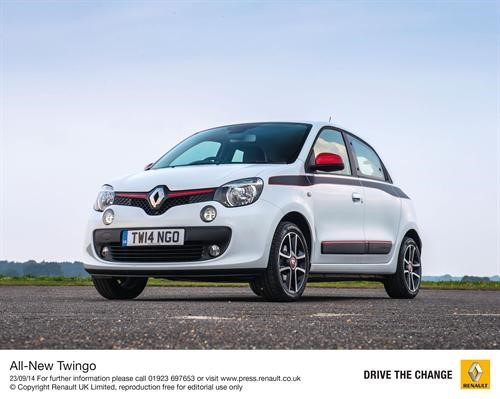 The new Renault Twingo will be known as the Dynamique S TCe and it gets the Sport Pack as standard, which was previously optional. The Sport Pack includes a sportier exterior and interior trim upgrades. With the Dynamique you also get aluminium pedals, red and black leather, and a red interior touch pack, which I personally would not want. This goes with the Exterior touch pack styling. If you haven’t guessed already the Twingo is by no means a beast, if you want a big manly car head over to www.buyyourjeep.co.uk, because we can’t help you here.

We can however help you if you want LED daytime running lights, front foglamps, electric heated door mirrors, cruise control, lane departure warning system, leather trim steering wheel/gearshift, air-con and white instrument backlighting.You get this on top of all that is already standard with all the new Twingos.

In terms of performance the Twingo’s engine can do 0-62 mph in 10.8 seconds and can hit a top speed of 103 mph and thanks to its use of stop and start technology, the cars efficiency isn’t compromised either, and has achieved an impressive 65.7mpg.I imagine that this kind of performance mixed with a turning circle that is only rivaled by the Toyota iQ makes for a pretty fun experienced.